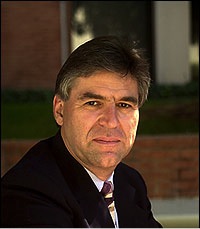 Professor Tanguay’s current research programs are highly interdisciplinary in nature, and include the development of hybrid electronic/photonic multichip modules for vision applications; the design, fabrication, and testing of both an intraocular camera and an eye-tracked extraocular camera to be used in conjunction with advanced conformal multielectrode arrays to form a retinal prosthesis for blindness induced by retinitis pigmentosa (RP) and age-related macular degeneration (AMD); the use of human psychophysical techniques to develop optimal image acquisition and stimulation protocols for retinal prostheses with limited numbers of microstimulator electrodes; the development of low light level imaging systems for ophthalmological examination without chemical mydriasis (pupil dilation); the study of lateral brightness and chromatic adaptation in the human visual system; and the search for the fundamental origins of layering throughout the human visual and cortical systems.

Armand R. Tanguay, Jr. is Professor of Electrical Engineering, Chemical Engineering and Materials Science, Biomedical Engineering, Ophthalmology, and Physics and Astronomy at the University of Southern California. He received a B.S. degree in Physics (Cum Laude) from the California Institute of Technology in 1971, and M.S., M.Phil., and Ph.D. degrees in Engineering and Applied Science from Yale University in 1972, 1975, and 1977, respectively. Professor Tanguay is a founding member of the Center for Photonic Technology, serving as both Deputy Director and Director, and was a founding member of the Integrated Media Systems Center, a National Science Foundation Engineering Research Center in multimedia and creative technologies. He was also a founding member of the Biomimetic MicroElectronics Systems Center, a National Science Foundation Engineering Research Center in neural prosthetic devices. He has further served as Director of the Center for Neural Engineering, Associate Director for Research of the Signal and Image Processing Institute, and is a member of the Neuroscience Research Institute, the Neuroscience Graduate Program, and the Center for Vision Science and Technology. Professor Tanguay is a Fellow of both the Optical Society of America (OSA) and the American Association for the Advancement of Science (AAAS), and has received the Yale University Harding Bliss Prize, the USC Faculty Service Award, and the Rudolph Kingslake Medal and Prize of the Society of Photo-Optical Instrumentation Engineers (SPIE–The International Society for Optical Engineering). As a member of an interdisciplinary team of scientists, engineers, and physicians, he was a recipient of a Popular Mechanics Breakthrough Award for the development of intraocular retinal prostheses for the blind.