As both an ophthalmologist and biomedical engineer,  Dr. Mark  Humayun works at the interface of engineering and medicine. Dr. Humayun and his colleague Dr. James Weiland assembled a team of world experts to create a revolutionary device, known as the Argus II retinal implant for those suffering from an inherited form of blindness called retinitis pigmentosa (RP). It is the world’s first FDA approved artificial retina system, which offers an unprecedented degree of sight to those with complete retinal blindness. The Argus II device is a 60 electrode retinal prosthesis that captures images by an eye glass mounted camera which sends wireless signals to the implanted chip. Once transmitted to the retina (light sensing and image processing part of the eye), the signal is carried to the optic nerve (the nerve connecting the eye to brain) and translated into an image. 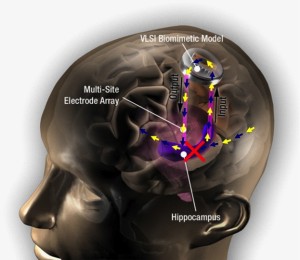 One of the IBT initiatives is to restore higher cognitive functions that are lost as a result of damage (stroke, head trauma, epilepsy) or degenerative disease (dementia, Alzheimer’s disease) through developing a neural prosthesis. Specifically, we are focusing on loss of long-term memory formation, which is supported by the hippocampus and surrounding limbic cortical brain regions.

By design, IBT researchers are focusing on the development of the underlying science and engineering required for a cognitive prosthesis, namely, the technology for bidirectional communication with the brain, advanced modeling methods to uncover spatiotemporal coding schemes used by the brain to represent long-term memories, next-generation VLSI “systems-on-a-chip” designs for hardware implementation of the prosthesis, and finally, several paradigms that would provide appropriate vehicles for testing and demonstrating the fundamental principles of a cognitive prosthesis.

In particular great strides have been made in developing a synthetic neurosensory interface which will help restore the cortical brain region (hippocampus) and limbic cortical system that has been damaged/diseased.

The essential elements of such a hippocampal prosthesis include: (i) a biologically-based mathematical model that mimics the function of hippocampal neurons (blue region, above figure), (ii) hardware implementation of the model to achieve miniaturization, parallel processing, and rapid computational speed (VLSI device, above figure), and (iii) penetrating electrode arrays to transmit inputs to the hardware device from brain regions normally afferent to the damaged region, and to transmit outputs from the hardware device to brain regions normally efferent to the damaged cortical neurons (pink vertical arrays, above figure). Thus far, prototype neural prosthetic systems have shown that memory loss can be restored in vivo that have had damage to the hippocampus region.

Next, read about Neural Scaffolds.