The aim of the neurophotonics platform is to develop novel neurophotonic prosthetic systems/devices in which a key component is a nanoscale photoswitch (or a photovoltaic nanoswitches, PVN) that makes neurons that are not responsive to light respond to light. A neuron is a cell that is activated by electrical stimulation and is capable of transmitting information through electrical and chemical signals. In our approach, the neurons will be treated with novel nanoscale photoswitches having customizable photophysical (light yielding) properties, which will facilitate light modulation of neuronal electrical activity. The creation of neurophotonic systems that act as nano-photoswitches, or tiny devices implanted in the eye, can effectively by-pass the diseased cells and induce normally non-photosensitive neurons to be able to respond to light. The novel photoswitches have the potential to significantly expand the power of neuroprosthetics.

Restoration of visual response in patients blinded by retinal degenerative diseases has been clinically challenging. Despite a progressive and severe loss of photoreceptors, the inner retinal neurons sending visual 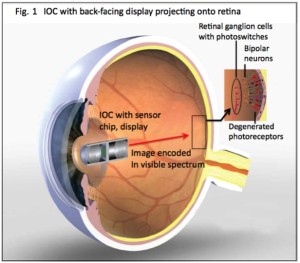 information to the visual cortex are relatively spared, providing a target for therapeutic intervention. Electrical stimulation of the inner retinal neurons has been shown to elicit visual perception in blind patients. More recently, optogenetic and biochemical tools have been developed to engineer light sensitivity in cells, and preclinical studies showed promise in restoring vision. In collaboration with Dr. Robert Chow’s lab, we aim to develop a new way to use light to control neural activity by novel photovoltaic nanoswitches (PVNs). PVNs are embedded in the plasma membrane and illumination generates an electrical dipole that charges the cell membrane and reversibly alters neuronal activity. They eliminate the need for invasive surgery and expression of foreign proteins, and they function at visible wavelengths and ambient light intensities. To impart light-sensitivity to retinal ganglion cells  (RGC) of a diseased eye that have lost it’s photoreceptors, a periodic intravitreal injection of photoswitches designed to target the RGC cell membrane would be all that is needed. RGCs are vital to visual function as they are cells that transmit images from the retina to the brain from information captured by photoreceptors. Essentially the proposed neurophotonic prosthetic is a hybrid of an electronic component and an external intraocular camera (IOC), that serves as a neural interface, sending electrical signals back to the eye where neurons injected with photoswitches are selectively activated. At the front end, an extraocular or intraocular camera (IOC) with camera chip and back-projection system serves to process images, modulate the image (in terms of wavelength, intensity, frequency, and duty cycle), and project the image onto retinal ganglion cells (RGCs), previously treated by intravitreal injection of PVNs. The IOC in this figure is enlarged relative the eye for illustrative purposes.

We have successfully showed that the PVN, synthesized in Dr. Harry Gray’s lab from CalTech,  confers light sensitivity in dissociated cell cultures. We recently demonstrated that in photoreceptor-degenerate rats, whole-mount retina treated with PVN showed illumination-induced increase in spike frequency in the retinal ganglion cells. Furthermore, intravitreal injection of PVN in vivo restores light-induced electrical activity in the superior colliculus and pupillary reflex in the blind rats. This study lays the foundation for developing a new generation of artificial retina as an alternative, novel treatment for the visually impaired patients. 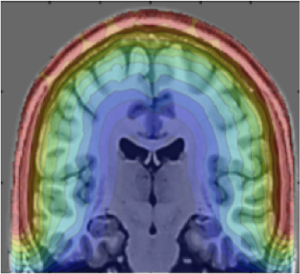 Our researchers are currently designing a new class of optically activated compounds for neuromodulation. These “caged” compounds may be released once activated by light. The new compounds are inactive or “caged” until they are activated by illumination by infrared light. Infrared light is able to penetrate more deeply into tissues than visible light. The novel caged compounds will augment the power of prosthetic devices, enabling use of different wavelengths of light to activate different processes. We have begun work on molecular targeting of the photoswitches to specific ion channels on specific neurons, taking advantage of the high-affinity binding of ion channel-active peptides (iCAPs) to specific ion channels on retinal ganglion cells. In addition, we have begun conceptual development of the image processing and projection hardware for the front end of a retinal cellular prosthesis system, which may be used to restore vision to patients who are blind due to retinitis pigmentosa or age-related macular degeneration.

Next, read about NeuroRx.